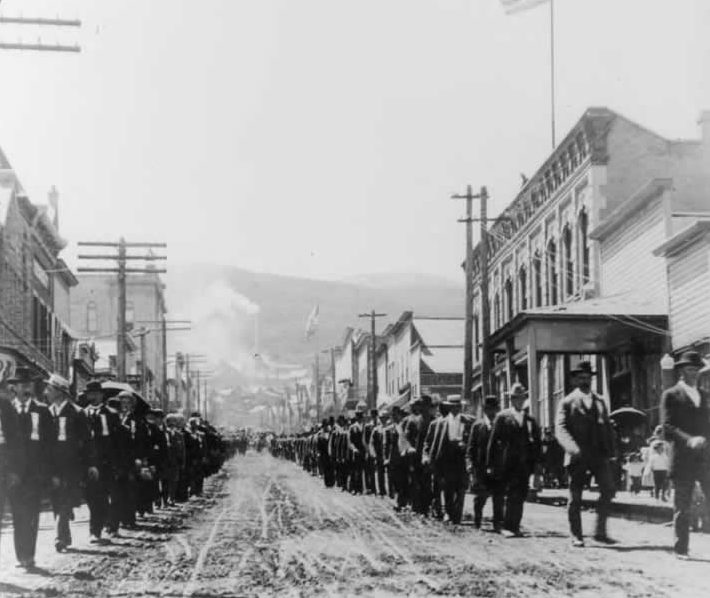 “Mutual aid networks cropped up all over the United States at the start of the lockdown, helping communities organize themselves in the absence of adequate state support. Those projects have a deep history in the US, especially within early organized labor.

This isn’t the first time mutual aid networks have proliferated across the United States. Between the mid-nineteenth and mid-twentieth centuries, thousands of “fraternal societies” provided access to healthcare, paid leave, and life insurance to workers in nearly every major city. Beyond constituting essential networks of care, these organizations served to strengthen and solidify the labor and socialist movements. As we build solidarity today, we can look to this past to help pave a path forward.

Mutual Aid in the United States

With the exception of churches, mutual aid networks constituted the most popular form of voluntary association in the US throughout the mid-nineteenth and early twentieth centuries. A 1933 report by the President’s research committee estimates that one in three adult men were members of a fraternal society by 1920.In the absence of a coherent system of government welfare provision, these informal organizations run by the poor and working class provided more aid than any other institution, private or public. As an 1894 New Hampshire Bureau of Labor report notes, “The tendency to join fraternal organizations for the purpose of obtaining care and relief in the event of sickness is well-nigh universal. To the laboring classes they offer advantages not to be had elsewhere.”Indeed, by the turn of the century, mutual aid societies had come to perform a wide variety of vital social functions. Many instituted a cradle to grave system, including orphanages, hospitals with full time doctors, and a sick leave allowance for every member.

Services were funded through monthly dues of roughly $2 a year, or approximately one day’s wages. Society doctors were elected by the membership, with their salaries dependent on its size. Among the impressive features of these organizations was the democratic political structure they took: rank-and-file committees regularly debated and voted on how funds would be allocated. Underlying the associations was a principle of “fraternalism,” used equally to describe predominantly male and predominantly female organizations.

Also impressive is the diversity of communities that adopted the model. Mutual aid societies organized by and for women multiplied especially during the influenza epidemic, with many developing women’s only health centers in the 1930s. All-black mutual aid organizations also grew rapidly, with the majority concentrated in New Orleans.

At the turn of the century, the city had comparatively low levels of public spending and a largely unskilled labor force. It had experienced double the death rate from yellow fever as the rest of the country, reaching 142 for every 100,000.

These factors gave birth to an active mutual aid tradition; New Orleans was home to approximately 135 all black mutual aid societies, forty of which were oriented exclusively towards black women. They performed increasingly political functions throughout the twentieth century, and particularly with respect to civil rights.

There were also a number of Hispanic and indigenous mutual aid networks: in Tampa, two centers were founded in 1905 to care for Cuban and Spanish cigar workers, resembling the cooperative clubs of nineteenth-century Cuba. By 1913, Colorado, New Mexico, and Arizona all had documented mutual aid networks among Hispanic miners. And across the Southwest, “sociedades mutualistas” offered support to indigenous communities.

Mutual Aid and the Labor Movement

What’s especially interesting about these societies today is their contributions to the labor movement.

The movement’s relationship to fraternal societies is noticeable in a brief survey of the names they adopted, like the 1862 ironworker union Sons of Volcan, or the 1867 shoemakers union Knights of St Crispin. The relationship was not unique to the US. As Sidney and Beatrice Webb note in one of the earliest histories of British trade unions, “it is fairly certain that in the vast majority of cases trade unions took their early features not from the traditions of any fifteenth century organizations, but from the existing friendly societies around them.”

A tradition of mutual aid was intimately tied to the struggles of Western miner’s unions at the turn of the century. The first major strike over occupational hazards was led by the Miner’s League of Grass Valley, California over the introduction of dynamite into the mines in 1869. In 1906, workers in the Daly-West mine in Park City, Utah walked out when the owners began using oil lamps instead of candles. Health-related concerns went hand in hand with union provided disability benefits and medical services.

Relationships among miners were characterized by a high degree of solidarity. When IWW founder Bill Haywood broke his hand, miners raised enough money for him to buy a house and support his family until he recovered. The sense of solidarity came with an aversion to philanthropy. Hardrock and silver miners formed benefit societies to ensure that they did not rely on charity.

In 1864, the Miner’s League of Storey County Nevada first attempted to hire a full-time, union-paid physician. In 1867, the Brotherhood of Locomotive Engineers became the first American Union to establish a national benefit program with disability insurance. Throughout the West, new locals committed to offering sick members between a third and a half of their lost wages, and benefits for disabled miners came to be viewed as an essential responsibility of unionism.

Between 1867 and 1920, the Virginia City Miners’ Union paid sick and injured members more than $450,000. By the turn of the century, multiple miners’ unions hired full-time union doctors, with some setting up prepaid plans at local hospitals. By incorporating elements of mutual aid societies into their services, unions were able to attract new members and grow. Labor historian Alan Derickson concludes that “health insurance helped induce men to become union members and remain in good standing.”

Initially, mutual benefit societies often formed “labor associations.” Towards the end of the nineteenth century, many of these early labor associations disintegrated into the Knights of Labor. The most dynamic labor organization of its time, the union grew to more than 700,000 members by 1886, with locals structured much the same as mutual aid “lodges.”

The union was explicitly conceived as an amalgam of existing mutual aid efforts; in an 1882 New York Herald article, union statistician Theodore Cuno proclaimed that the Knights of Labor would “bring together the beneficiary element of mutual aid society and the protective phases of trade unions.”

Benefit societies were also highly influential for the socialist movement more broadly. Lodge practice was a central feature of the International Workers Order, a communist party affiliated organization which provided low cost life and health insurance to workers. The IWO formed as a split from the Workmen’s Circle, a New York City-based Jewish mutual aid society founded in 1892. The organization was led by Max Bedacht, whose notion of “proletarian fraternalism” was intended to overtake the “bourgeois fraternalism” of some cross class benefit associations.

Bedacht held that mutual aid societies were essential to protecting workers against the brutalities of the market, and stressed that the societies ought to bear an explicitly political character. Unlike many mutual aid societies of its time, the IWO actively campaigned for social security, aided in the organizational efforts of the CIO, and participated in the antifascist movement. The organization soon became the most rapidly growing fraternal organization in the country, expanding from five thousand to 184,000 members between 1930 and 1947.

It was unique among benefit societies for its internal diversity, with members from more than fifteen different nationalities and of all races. It was also unique in seeking its own disintegration; through continued struggle against low wages and unsafe working conditions and in favor of expanded social insurance, IWO members envisioned a society in which the organization would cease to serve a purpose. The Order encouraged its members to “make themselves active parts of the fighting organizations of the working class on the economic and political battlefields of class struggle.”

Read this article on Jacobin